Dolly wrapped her arms and legs about the trunk and pulled herself up the tree. Mom and Dad had warned her about playing near the Willis's barn on Sixth Street, but she couldn't help herself. It was so relaxing to lay back on the barn roof, to lose herself in the blue sky, the shapely clouds, the storybook houses dotting the green hillside of the city, the gray-blue metal of the ships and the gray-blue waters of the harbor. This is what she thought as she made the leap from the tree to the rooftop.

Then she was rolling off the corner, tumbling through the bright air, floating fearfully to the rising ground and whoof! Oh my God! Her side stung! But she could breath, she could move, she could sit, she could stand, she could walk. Thank God! How could she explain how it happened? What would Dad say?

She let herself into the house on Eighth Street, made her way to the bathroom without interference, pulled shut the door and turned the lock. She ran the water in the tub and stripped off her clothes. Oh, God. It was bad. Her side screamed red with the angry scrape. How could she hide it from her mother? Dolly had never known modesty before her mother, nor Mom before her. Any minute now, Mom would fill the bathroom door, crowd the bathroom with her chatter. Mom would see the scrape and want to know what happened. And then she would tell Dad.

The knock on the door. Dolly! Are you okay? I need to come in. Not now, Mom. I'm busy. I need my privacy.

Dolly held her breath. She heard her mother's footsteps retreating from the door.

Dolly stretched her ears as far as they would go.

Dolly has the door locked. She wants her privacy. I think our little girl is becoming a woman.

Dolly let her breath out. She leaned back in the tub. 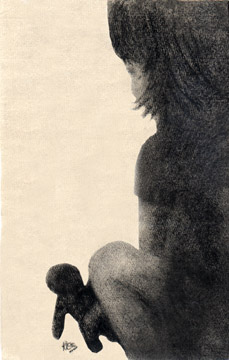 Dov's belly felt light. It tingled. Of course. It was more than a year since he read his Haftorah. He was supposed to be a man. What I've done for you. Papa grinned. My old friend. And the girl. Ah!

Starting at the bottom of the tunic, Dov pushed the wooden buttons through the loops. He pulled on his good trousers. Boots. He would take a walk. He would tell no one. He would see for himself. He was a man.

Grass rose in tall green tufts, beside the path. Yellow dust rose and settled on his boots. She was little, little. The dirt rested on her shins, on her chin, on her cheeks, on the worn dress, barely yellow. Dov said nothing. The girl didn't notice. She talked and sang. Dov's ears buzzed.

The girl lifted her dress over her head. Dov could see her round behind, soft and pink beneath the dust. A yellow stream squirted from her privates, leaving a dark, foamy oval on the path. The girl let her dress down. She was still singing. Her small hand scooped a clump of foamy earth. She patted the mud between her hands, forming a small cake. Then she scooped another clump.

Dov wiped his palms against his trousers. He fingered the top button of his tunic. He looked back at the village, looked in all directions, but there was no one. Just Dov and his bride.

Mr. Kovel is a lovely man.

There is something so tender about him that Dolly can't help herself. Whenever she comes to visit her father, she has to wrap her arms around his legs. He stands, patient, stiff. She doesn't notice his discomfort. He doesn't like to be touched by the other sex, not even little girls.

Each year at Passover, they find the bottle of wine by the door. Mr. Kovel brews it in big glass jars that ferment for months in the earth. It is early morning. He is nowhere to be seen.

Mr. Kovel is learned. It is required in his profession.

He lifts the chicken gently like this, delicately plucks two feathers from its neck, so, and snick with the blade. The air fills with down, sawdust, and the scent of blood. Mr. Kovel moves dreamily to the next, the next, the next. The ritual.

Before the slaughter ends, the first bird lies naked, flicked and plucked. Her mother's work. Some go in brown paper, some on white enamel behind glass, some to the white chill of the meat locker.

By then, Mr. Kovel has vanished.

Dolly is far away when she reads it in her mother's neat cursive. Mr. Kovel. Dead in bed. When they removed his clothes, his legs were wrapped in rags. Who can say?

Julie was putting candy in the big glass jars when he heard the small brass bell on the door. The man filled the doorway for a moment. Above his head, the sunlight poured in. The man's big black shoes made little swirls in the sawdust as he stepped over the dark brown floorboards. The man took a few cans from the shelf by the door, and walked to the counter. Pa came out and spoke to the man. The man spoke words but Julie didn't understand them. The words were in another language. Pa understood. He spoke to the man. Pa knew how to speak to all the customers.

Pa looked over at Julie. He smiled at Julie, bent down, hoisted Julie up and set him on the counter. Pa smelled fresh. The aftershave. The hair tonic.

Julie felt warm inside. The warm feeling spread through his chest, across his shoulders, down his arms. Now he knew what he would be.

Julie looked up at the big man. The man's hair was black and straight and fell into his eyes. The man smelled like leather and something else, that smell big men had after lifting heavy things. Pa never smelled like that. The man smiled at Julie. His teeth were big, white. A few were chipped. The man ruffled Julie's hair. His hand was square and rough. It had the leather smell. "Good. You have good father."

Pa snatched and flicked the paper sack. Pop! It opened. Pa packed the cans, added herring wrapped in paper, a small salami, a dark loaf of rye bread. The man signed Pa's book. Julie watched things floating in the narrow oblong of sunlight trickling from the front window. He felt happy looking at them. He wondered what they were, how they got there.

The Men of Berditchev

At night, the u-boats came, carried him back to Berditchev where he swam beneath the pier and hooked the ladies bathing gowns to stray nails, and woke, eyes filled with loneliness.

But daylight was fine. He flicked the whip, the horse pulled and the sleigh slid. The air bit crisp in his nostrils. The wind carried the scent of fish from Lake Superior. Men waved and called the new name. Jack. Jack. Showing off one day, he held two men over his head. Now they remembered.

Up and down the town's hill, he delivered the parcels, wrapped in twine and butcher paper. He grasped hands and shoulders. He laughed, pointed, spoke to men who spoke his language and to the others. Their language was coming too. The names of things were coming with the laughter.

Dusk was falling, when he saw the rebbe. The rebbe's whiskers almost touched the ground. And the boys, the boys. Pulling on the whiskers.

Jack spit. Disgusting. Six feet tall, an old man sure, but big, big enough to chase a gang of boys. This wouldn't happen to the men of Berditchev. When the goyim came, the men of Berditchev grabbed the tools of their trade, his papa the meat cleaver, another man an axe, another a pitchfork, another a shovel, and they waited. The goyim turned away. Always.

The boys pulled the whiskers. They called names. They spit at the rebbe.

Jack pulled up on the reins. He climbed down from the sleigh. He kept hold of the whip.

[an error occurred while processing this directive]